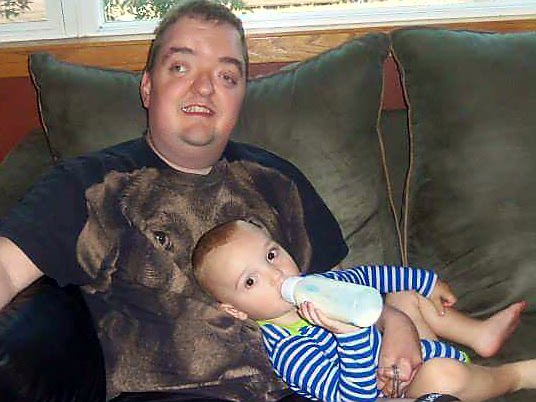 My brother Joseph has always played a large role in my life. As my life has matured and changed he has been an ever present source of consistency. His childlike mentality has remained unchanged throughout the years. Change causes him a significant amount of anxiety and my family and I have done our best to provide him the structure he craves.

When I first became pregnant with my son I worried about the impact such a dramatic life change would have on Joseph. I remember when I first told him I was going to have a baby. He gave me a strongly confused look and said, “Why!?” It was months before he would even talk with me about the baby. Eventually the conversation progressed to Joseph saying he “wouldn’t leave the baby in a park”. It was a start.

After my son was born Joseph was slow to warm up. He would hold him for brief periods but showed very little interest otherwise. I worried that this level of disinterest would persist throughout their relationship. Joseph is different enough, I did not want him to be a cold presence also.

Luckily my fears were unfounded. As my son grew, so did Joseph’s interest in him. The tipping point was when Joseph shared his Sesame Street dollhouse with him. This toy has been Joseph’s most prized treasure since I can remember. He has taken such good care of it no one would believe it is over 25-years old. One afternoon Joseph came upstairs from my parent’s basement with the prized toy. He very gently showed my 15-month old son all of the pieces and how everything went together. I was near tears with joy… and overcome with fear that my toddler monster would break something.

As my family has grown, so has Joseph’s presence in the lives of my children. Joseph is the ultimate supervisor and playmate. My kids love spending time with their uncle.

However we have reached an interesting point in our lives. My son is now 6-years old and has passed Joseph on most intellectual milestones. This has not gone unnoticed by my son.

Currently most of the questions my son asks involve why Joseph does not behave like a typical grownup. I struggle to provide a meaningful explanation. Most of my answers skirt around the idea that everyone is different and trying to explain specifically what makes Joseph different. It is difficult for me to define my brother in terms that my son will understand. I feel that my explanations are always so limited compared to who Joseph is and what he has accomplished, regardless of his disability.

I have watched the relationship between my brother and my son evolve. My son has now taken on a caregiver role, very similar to the role I once played as a child. He makes sure that Joseph has the help he needs and always thinks about Joseph’s physical limitations. My son opens packages, makes sure Joseph has a comfortable place to sit, and minimizes the amount of stair climbing when possible.

Joseph’s impact on my children’s lives is evident in how they treat people within our community. My son has no fear of people who are different from him. His reactions are gentle, empathetic, and friendly. I cannot explain how many “friends” we have made while out and about. I’m always nervous about how his interactions will be perceived by the individuals and their caregivers. So far, reactions have been nothing but positive. Many people seem happily surprised to be approached. These interactions have allowed me to have conversations with many caregivers. There seems to be an overall consensus that it feels good to be acknowledged rather than ignored.

My daughter is following in the same footsteps. Most notably, we were recently at an indoor play area when a mother brought her young son to play. The boy was rocking back and forth and loudly humming. Coincidently these are very similar stimulation behaviors to the ones that Joseph often displays. My daughter did not miss a beat. She gently approached the boy and his mother. She asked if they could play together and I could see the hesitation in the mother’s eyes. My daughter sat down and started to quietly play with a puzzle on the wall. The little boy started watching her motions and was clearly interested in what was happening. My daughter stepped back and waited for him to approach the puzzle. He tentatively walked to the puzzle and started to manipulate the pieces. Soon enough they were playing side by side. My daughter was not startled by the loud vocal sounds or unpredictable hand flapping. She was just happy to have a playmate. His mother and I made eye contact and I could feel her relief.

As my children age, I hope that they can mold their relationship with their Uncle Joseph into something meaningful. Joseph has positively impacted my life, and I know the lives of my children would not be the same without Uncle Joseph.

3 thoughts on “The impact that my developmentally disabled brother has on my children. ”

This site uses Akismet to reduce spam. Learn how your comment data is processed.

A collaborative effort of a few women with a need and want to talk about some common ground topics.